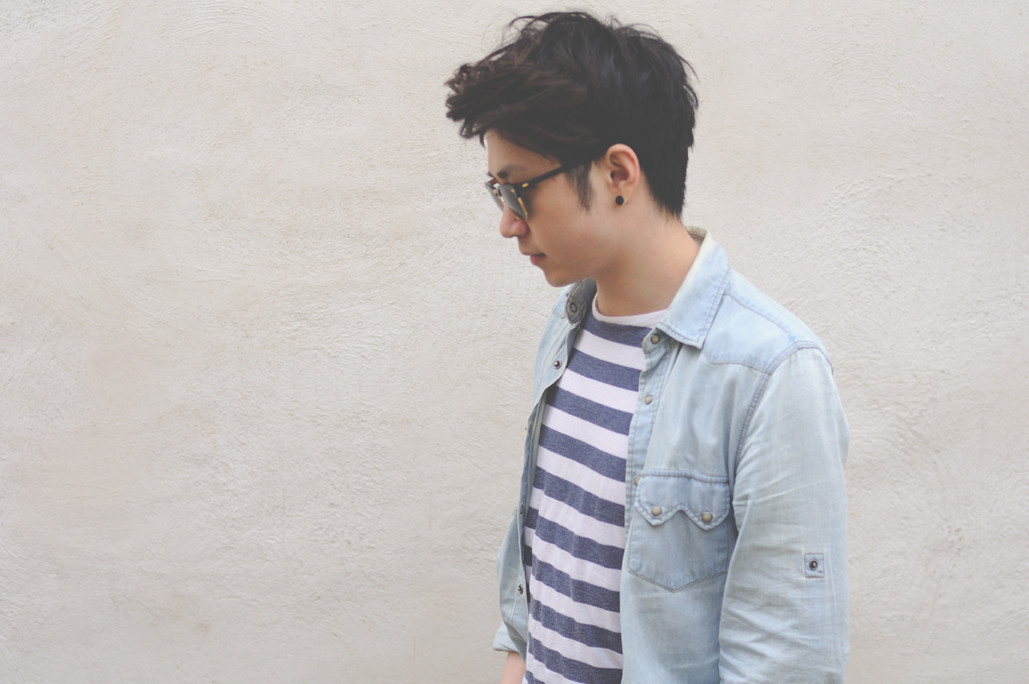 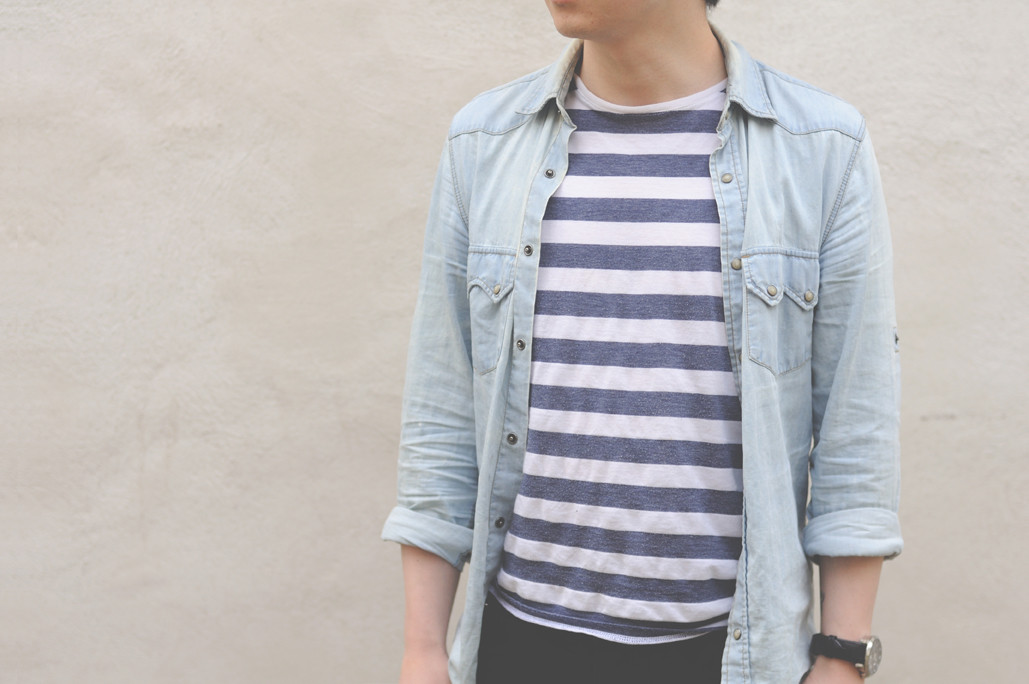 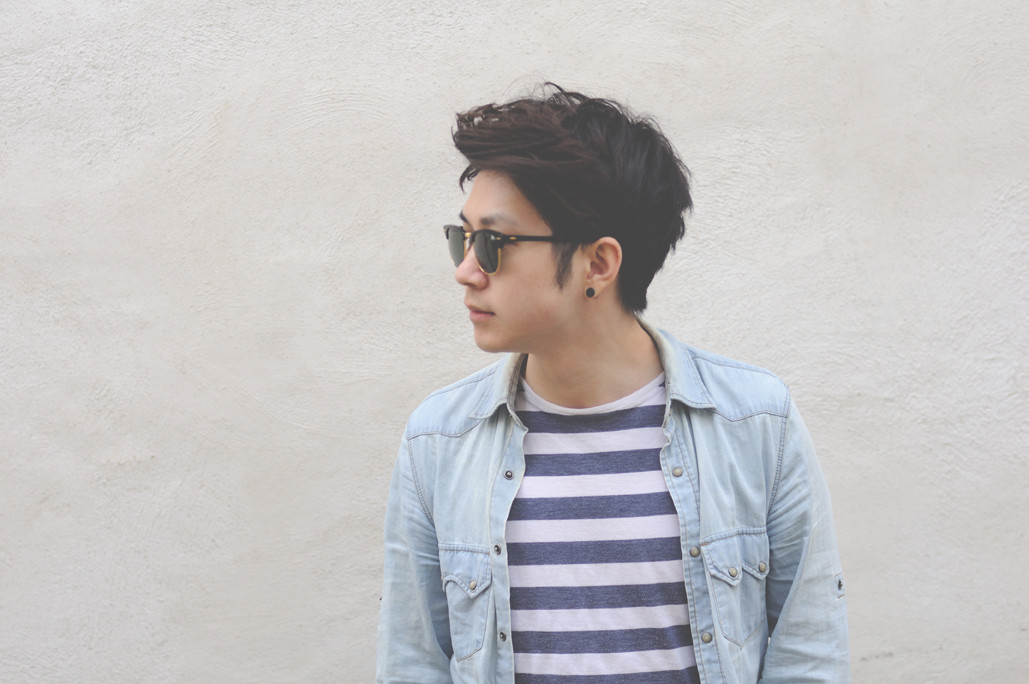 
This is the classic springtime nautical outfit that seems to make its way to the front of the wardrobe this time every year! Its a simple yet effective outfit, and if you get the right shirt and jeans can even be quite smart. The shirt I'm wearing here is quite worn in which gives a more casual and informal look. Teamed with some casual black skinny jeans and Ray-Ban Clubmasters (for that extra nautical look) its a perfect outfit for a sunny day out.
Posted by N.E. Boy at 1:08 pm 2 comments:


It was a rare January sunny morning in the North East, so it was great opportunity to go for a stroll in the park. I'm still feeling a bit of a festive hangover, the burgundy sweater (another bargain from Primark) I'm wearing here is the one piece of clothing I wore almost everyday throughout the holidays! Today I wore it with an old denim jacket for that authentic 90's look!

I also had my first chance to try out a new bottle of Bumble and bumble surf spray last week. As you can see from the pics above, it gave a lot of texture and a scrunched look (it was very windy today so that could have aided the wind-swept look!) . I'll be doing a full review and write up of the Surf Spray this week. I really have been impressed with Bumble and bumble, I have also written a review on the Sumo Wax which you can find here.

I can't believe we're a week into 2014 already, and 2013 went by quicker than I could say 'Happy 2013'! I'm not really into the whole New Years resolution thing, but if I was to have one for 2014, it would simply be to actually enjoy the year and take in as much of it as possible before the Christmas songs come on in the shops again! What are your New Years resolutions for 2014?
Posted by N.E. Boy at 2:51 pm 3 comments:

Posing with a beautiful rear!

So the OCD isn't a recent development!

Look at the concentration and old school printer paper!

Some of my work on display at Northumbria University.

I have a confession to make, I'm in love with cars. I love cars like women love shoes! I wish I had a romantic story to tell about the first time I laid eyes on a Ferrari and fell in love, but the truth is I've loved cars for so long that I can't remember the first time this realisation struck me! I was born into a family of car and motorsport fanatics. My dad and uncle had a series of various performance cars over the years and I was even named after triple Formula 1 Champion Niki Lauda.

So it comes as no surprise that this passion was passed onto me as a young child. Every birthday and Christmas, all my toys would be either model cars or some form of vehicle, and if my parents or grandparents wanted to keep me occupied, all they had to do was give me pen and paper and I'd be happily drawing cars for hours! This eventually led to me graduating from an automotive design course at university.

As I have got older it is Formula 1 that totally consumed my life! I watch all the practice sessions when nothing actually happens and I even wake up at ridiculous o'clock to catch the races live when they're in the far east. None of my friends and family understand my love for it! They just think I'm crazy when I can watch the replay at a normal 2 pm on a Sunday afternoon! Nor do they understand why I have to, or even want to fix my own car! "Take it to the garage" they say, but they don't understand the beauty of getting down and dirty with the nuts and bolts of your car, that sense of achievement of having fixed something! It's going to sound really sad, but my feelings for my car are somewhat similar to the feelings a dog owner has to their pooch! It's a two way thing, I look after the car, and the car gives me joy when I drive it!

I can't really explain why I love cars, I never get bored of looking at them. It doesn't even have to be an exciting car, I could be following a Ford Focus in traffic and I'd be staring at it and boring everyone in the car with facts and figures about it! I can even tell the make and model of a car at night from the shape of the rear lights, this party trick is usually followed by questions such as "What was your score on the autism test again?". To many people a car is just an appliance or tool. I mean, can you imagine your friend started telling you the specs of a washing machine?! To many people a car is on the same level as a washing machine or computer, a tool that does a job. But for me, its something to study, understand and admire. I think I may have a problem...

I'm still trying to find a couple of good and reliable locations for my photos, and I think I may just have found one good spot in Yorkshire. Its a nice and quiet walk flanked by cottages and as you see above, a nice white painted wall as a bonus!

If you read my last post then you may remember me mentioning a check lumberjack coat I've had for 3 years, well here it is! I actually bought it in the Topman January sales, back when sales didn't run all year round! Its served me well, and it definitely did its job of keeping me warm on this sunny but chilly afternoon in North Yorkshire!

I was a bit apprehensive about wearing the coat with this tartan shirt, but in the end it all worked out giving a nice clash-on-clash contrast with the black sleeves and jeans. The footwear were my trusty Puma TX-3 trainers (today I learnt they were first introduced in 1987) which gives the outfit a much needed urban flavour in contrast to the lumberjack jacket.
Posted by N.E. Boy at 7:14 pm 5 comments:

The cold weather has arrived and I thought I'd equip myself with a new winter jacket, the last winter jacket I bought was a Burberry-esque lumberjack coat nearly 3 years ago! I don't usually shop in River Island but I actually saw this duffle coat on ASOS. Initially I was looking for something a bit more casual like a Parka, but this navy duffle was just too nice to overlook.

The shape of the coat is quite boxy, combine that with the classic duffle look and neutral colour it'll probably stand the test of time well (it'll hopefully serve as my winter coat for another 3 years!). The length of the jacket is a bit longer than I would like but this shouldn't be an issue for most people. There are some nice details, such as the rustic heavy duty toggles, which are in contrast to the subtle quilted stitching found inside the hood. All in all, it strikes a nice balance between casual and formal. As you can see it can be worn quite casually with a simple knitted jumper and jeans for that rustic heritage look, or it can easily be worn with trousers and a smart shirt for a more formal occasion.

How to style thick hair : Bumble and bumble Sumo Wax

Have you ever questioned "how do I style my thick hair?". I've always had a problem finding hair products that are strong enough to style my heavy Asian hair. I've been through countless brands and spent plenty of money on hair styling products that promise to have a strong hold, yet none have been able to give a strong and consistent hold throughout the day.

Then a friend of mine strongly recommended Bumble and bumble and I'd also heard about about the brand through blogs but never actually tried any of their products myself. The product from the range that appealed to me the most of the Sumo Wax. I'd always been a bit put off by hair waxes as they tend to leave a greasy residue on your hair, but I decided to take a gamble on the Sumo Wax as it was the toughest styling product on the Bumble and bumble shelf. At £21 it was bit pricey but I was assured it would be worth it!

The Bumble and bumble branding is very cool, edgy and quirky without being cheesy or tacky, each product range has its own personality which helps a lot to distinguish the different roles of the products. The jar of the Sumo Wax itself is rather small (only 50ml), but thats because you don't need a massive amount for it to do its job. The wax is very stiff and rigid, which is a good sign for thick and hard to style hair. It actually states on the packaging that you may need to heat the wax up with a hairdryer before you use it. You simply apply it like any sculpting product and it gives a really nice textured effect. In the picture above, I used a salt spray during drying before the wax, but I've never experienced a product that gave me the same amount of texture and curl.

My hair is very hard and straight and as you can see, the Sumo Wax gave it great texture and definition whilst maintaining that natural effortless "surf hair" feel. I just finished with a light coat of hairspray and the hold was indeed very long lasting yet touchable. Although the product is very stiff when its in the jar, it feels no heavier than any other product I've had in my hair and it washes out with no problems (which is not always the case with cheaper hair wax). After trying the Sumo Wax, I'm definitely going to explore more of the products in the Bumble and bumble range. If the performance of the Sumo Wax is anything to go by, I can only expect good things from the rest.
Posted by N.E. Boy at 7:49 pm No comments:

When it comes to a shirt for the coming British autumn and winter months, none are as fitting as this Ben Sherman Umbrella Print Twill shirt. It features an umbrella print that symbolises the British winter perfectly. It also fits perfectly, being from the Plectrum line of Ben Sherman clothing, combining classic styles and colours with contemporary fits and details. The attention to detail is what distinguishes it from shirts found on the high street. Details such as the arrow placket, fabric buttons and rounded front really make you feel you're wearing something different. The hidden print of a man holding one of the umbrellas was a nice little surprise I found long after I bought the shirt, along with the metal plectrum on the side seam.

The shirt can be worn casually, as I have done here with black skinny jeans and a pair of punchy Puma TX-3 trainers along with my trusty Wayfarers, or with a nice floral tie or bow tie for a more quirky and smarter look for a formal suit and tie event. I've always been more of a high street shopper, but since I bought my first Ben Sherman shirt a few years ago, I've been converted, their shirts are high in style and quality, plus it feels awesome to be supporting a British label.
Posted by N.E. Boy at 12:09 am 1 comment:


North East based menswear, male fashion and lifestyle blogger. Sharing lots of cool imagery and insight into the life of a North East boy.

All artwork and copy is produced by me (unless otherwise credited) and must not be reproduced or used without permission.